Today, as many of us recover from turkey hang-overs (at least those in the US), and others rush around to score Black Friday deals, I chose a story that celebrates the bounty and community that are at the heart of Thanksgiving. While it’s not a new book, I think its appeal endures and make it a Perfect Picture Book: 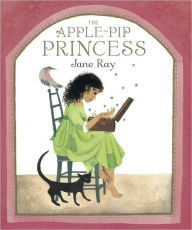 Opening: “Let me tell you a story about something that happened a long time ago in a land far from here – a land ruled by an old king who had three daughters.”

Brief Synopsis: An elderly king ruling over a bleak, barren kingdom sets each of his three daughters a task: to build in seven days something that will make her mark, that will make the king proud. Whichever of his daughters builds that thing will inherit his crown.

The Apple-Pip Princess is a modern fairy tale. Need I say more? Like the best fairy tales, it is an allegory for issues in our own 21st century world: caring for the environment; the hollowness of material possessions; the power of one person to better the world; the power of community. Told by a narrator speaking directly to “you” in lyrical language that flows like the best fairy tales do and accompanied by illustrations fit for a royal tale, including several collages incorporating digital art in a unique manner, The Apple-Pip Princess is a wonderful way to open discussions about our need to care for our world, the effect our actions have on our world and fellow beings, the importance of community, and why being the tallest or the most beautiful really doesn’t matter.

Incorporating these twists into the  classic formula, I think, makes The Apple-Pip Princess a fairy tale that will endure.

2 responses to “PPBF – The Apple-Pip Princess”