In celebration of the release of a new version of a tale as old as time, today’s Perfect Picture Book is a fairy tale retelling. But, as you will read, this is no mere “change this, update that, fiddle with the ending” version. Rather, it’s a window into many world cultures, and for this reason, I’ve chosen to review it as a Perfect Picture Book: 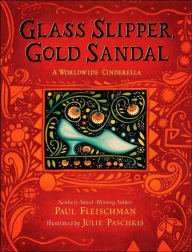 Once upon a time there lived a wealthy merchant whose wife had died. They had one daughter, gentle-eyed and good-hearted.

Brief Synopsis: The traditional Cinderella story, told with the details found in the many versions of this story handed down from around the world.

Glass Slipper, Gold Sandal is a composite version of this popular fairy tale told by incorporating details from the many versions of the Cinderella story told throughout the world. As stated on the book jacket:

Once upon a time, in Mexico…in Iran…in Ireland…in Zimbabwe…There lived a girl who worked all day in the rice fields…cooked in the royal kitchen…tended the cattle…then spent the night by the hearth, sleeping among the cinders.

The girl’s name is Ashpet…Vasalisa…Sootface…Catskin…Cendrillon…Cinderella.

Her story has spanned centuries and continents, changing to match its surroundings. Now Newbery-winning author Paul Fleischman and illustrator Julie Paschkis braid its many versions into one globe-spanning tale, a hymn to the rich variety and the enduring constants of our cultures.

With vibrantly detailed folktale illustrations and book-ended with a charming picture of a mother and daughter reading the story together, Glass Slipper, Gold Sandal is a book to read, and re-read, again and again.

Fairy and folk tale retellings are a popular genre, for readers and writers. When a familiar story is retold, the author must consider which parts to change to fit the time, place and intended audience. Often, the changes cause the new story to become popular only within a segment of potential readers: those seeking humor, perhaps; or those who desire a different ending; those desiring to read about a particular culture; or even those who love pirates, dinosaurs, or ninjas, to name but a few.

Glass Slipper, Gold Sandal differs from these retellings because Fleischman has not changed any of the original story but through his storytelling, he has highlighted what is the same and what’s different across various cultures. He has, in effect, opened a window into the various Cinderella versions and I believe he has achieved a story that will prompt discussion about what’s the same and what’s different in the many cultures highlighted.

For a lovely picture book that sets the familiar tale as old as time in an African setting, see Beauty and the Beast, H. Chuku Lee, illustrated by Pat Cummings (Harper Collins, 2014).