PPBF – Three Balls of Wool (Can Change the World)

I first became aware of today’s Perfect Picture Book when I read a wonderful and thought-provoking review by Maria Popova in her online newsletter, Brain Pickings. Based on her review, I knew this was a book I had to read, and share with you! 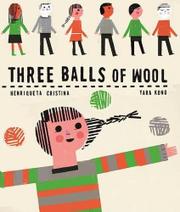 Title: Three Balls of Wool (Can Change the World)

When I was eight years old, I lived in a warm, sunny country. It was also one where few children went to school.

My parents worried so much that lines appeared on their foreheads. They said words I didn’t understand. Words they whispered to each other, like: “Ignorance.” “Fear.” “War.” “Prison.”

One day I heard them say, “Exile.” The line on my father’s forehead deepened. The next day we left before dawn.

A family flees their homeland when life in a dictatorship becomes dangerous. They reach a country in which creativity and freedom of expression are non-existent, until they arrive and provide an example of how to combat conformity.

Through simple, kid-relatable words and images, Cristina and Kono bring understanding to the situations of refugees before and after they flee their homelands. In Three Balls of Wool, the young narrator notes some of the reasons the family left their home, including lack of education and worry expressed by parents through “lines” on foreheads and whispers about war and prison. But not only was their new home different, with a different language, it also was gray, cold and drab. All of the children wore only gray, green or orange sweaters, and “followed each other in an orderly way, almost as silent as the street lamps.”

While it’s the mother in Three Balls of Wool who conceived of a way to counter the drabness and conformity, she was inspired by the narrator’s braids, and the narrator and her brothers bravely wore the new sweaters to the park where initially a “strange silence” and everyone “staring” greeted them. But the narrator’s “voice grew stronger,” and in the final scene we learn that others followed the mother’s and children’s lead to express their individuality.

I think this very visual exploration of how to integrate some of one’s old life into a new situation and how to celebrate creativity over conformity will resonate with kids and give rise to interesting discussions about how newcomers integrate into a society, how their skills and creativity enrich their new homes, and how small steps can lead to positive change.

Color and pattern are integral to Three Balls of Wool and its message of “being the change.” Cristina’s focus on a visual metaphor is an important reminder to focus on a kid-relatable element such as the monotone versus patterned pullovers. I also love that the metaphor of choice highlights the mother’s creativity and serves also as a subliminal metaphor for integration. Finally, Three Balls of Wool is based, per the Afterword, on the experiences of a family who fled Portugal during its dictatorship with its lack of education and inequality and settled in egalitarian, Communist Czechoslovakia. The imagery is a stark reminder that there was a price for this equality, but through creativity, change was possible there, too.

Per the book jacket, Cristina is a teacher who “likes to share stories” in her native Portugal. Born in São Paulo, Brazil, Kono is an award-winning illustrator and graphic designer at Planeta Tangerina, the original publisher of Three Balls of Wool. Enchanted Lion Books is “an independent, family-owned children’s book publisher based in Brooklyn, New York.”

This entry was posted in Uncategorized. Bookmark the permalink.