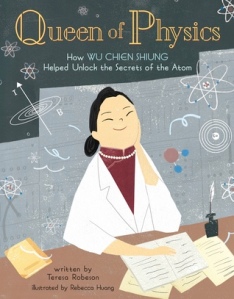 Queen of Physics: How WuChien Shiung Helped Unlock the Secrets of the Atom

Meet Wu Chien Shiung, famous physicist who overcame prejudice to prove that she could be anything she wanted.

When Wu Chien Shiung was born in China 100 years ago, most girls did not attend school; no one considered them as smart as boys. But her parents felt differently. Giving her a name meaning “Courageous Hero,” they encouraged her love of learning and science. This engaging biography follows Wu Chien Shiung as she battles sexism and racism to become what Newsweek magazine called the “Queen of Physics” for her work on beta decay. Along the way, she earned the admiration of famous scientists like Enrico Fermi and Robert Oppenheimer and became the first woman hired as an instructor by Princeton University, the first woman elected President of the American Physical Society, the first scientist to have an asteroid named after her when she was still alive, and many other honors.

Read a review by Kathy Halsey at Group Blog.

Every evening, from the time she was a child, Maria Mitchell stood on her rooftop with her telescope and swept the sky. And then one night she saw something unusual—a comet no one had ever seen before! Miss Mitchell’s extraordinary discovery made her famous the world over and paved the way for her to become America’s first professional female astronomer.

Gorgeously illustrated by Diana Sudyka, this moving picture book about a girl from humble beginnings who became a star in the field of astronomy is sure to inspire budding scientists everywhere.

Read a review at Gathering Books.

I paired these books because they recount the lives of two female scientists who were trailblazers in their fields. Although Maria Mitchell received more recognition in her field in the 19th century than the 20th century physicist Wu Chien Shiung did in her field, both battled prejudice in their male-dominated professions, both had parents who kindled and supported their love of science, and both endured to excel in their chosen fields and become faculty at prestigious American universities.

One response to “Perfect Pairing – of Female Scientists”