PPBF – The Secret of the Tattered Shoes

Sometimes when events in my own life or on the world stage get me down, there’s nothing better than retreating into a fairy tale – a fantasy world filled with princesses, heroes, and magic. And when that tale is a collaboration between an award-winning British author and an award-winning Iranian illustrator, I know that I’m in for a treat (and a welcome respite from the divisions that threaten our world), and that you are, too.

Title: The Secret of the Tattered Shoes

A soldier, weary from war, wandered the land. His heart was heavy, troubled by all he had seen and much that he had done, in the name of the king.

In a forest, rich with the green light of sunlight through emerald leaves, he met a woman. He was a hollow shadow of a man. She brimmed with light and life.

With the help of a wise and kind woman, a war-weary soldier accepts a king’s challenge to discover why the shoes of his 12 daughters are worn out each morning.

A war-weary soldier meets a woman in the woods. She tells him of a mystery in need of solving by a hero, and she presents him with advice and a gift to help in the quest. When the young man arrives at the castle, he meets a king who needs to know why his daughters’ shoes are worn thin each morning, even though the girls are locked in their chambers each night. The quest: to discover the secret. The stakes: succeed and the soldier is free to marry the princess of his choice and inherit the kingdom and its riches; fail and he forfeits his life.

Like the fairy tale on which it is based, The Secret of the Tattered Shoes combines mystery, magic and a quick-thinking hero. It’s a child’s story, so the adults know in advance that our soldier will survive and solve the mystery and that love will prevail. I won’t spoil the story by sharing how the hero prevails and how he reacts when he does.  Suffice it to say that anyone tired of damsels-in-distress stories will be pleased to read Morris’ version and to learn of the soldier’s choice at the end.

Not only does Morris’ text read like a fairy tale of old, but Abdollahi’s mesmerizing and richly-coloured collaged illustrations transported this reader to a faraway land where magic is possible, and kindness and love prevail.

This is a fairy tale retelling and I heartily recommend that writers read the original and Morris’ version side by side. When I did so, I was surprised to see that in many places Morris tracked the original quite closely. But there were subtle changes, including starting with the forest scene rather than a recounting of the mystery and changing “old woman” in the woods to “a woman”, thus rendering her less witch-like, although clearly someone with magical powers. Even the surroundings seem life-giving and capable of restoring the weary soldier. Could it be that love prevails better in the refuge of the sylvan wilds than in a gilded court?

Learn more about the independent UK publisher, Tiny Owl Publishing, Morris and Abdollahi. See my reviews of three of Abdollahi’s books, When I Coloured in the World, A Bottle of Happiness, and Thinker: My Puppy Poet and Me. The latter two are also international collaborations, building bridges between creators from different cultural traditions and showing readers how the world can be better when we work together.

PPBF – Cinderella of the Nile

Many of us in the US are heading out for the start of the summer holidays this weekend. And what better thing to pack than a good book, especially if that book transports us to a land far away and to a time long, long ago…

Title: Cinderella of the Nile

Suitable for Ages: 4-8 or older

Long, long ago when pirates roamed the seas around Greece, a beautiful baby girl was born in a village to the north. She had eyes like sapphires and fine red curls. The happy parents, who had waited many years for this child, called her ‘Rhodopis’ because her cheeks were so rosy.

In this retelling of an early Greek version of the Cinderella story, a kind-hearted young girl is transported to a land far from home. There she toils as a slave, until a new owner treats her as a daughter and gifts her red slippers, and a wife-seeking pharaoh falls in love with her.

Like many other young and not-so-young readers, I love fairy tales. I especially love seeing how versions differ across regions and eras, even as the story themes remain the same.

In Cinderella of the Nile, I found several aspects of the storyline that differed from the popular version of my youth. For instance, this story lacks an evil stepmother and a fairy godmother. Instead, Rhodopis begins life with loving parents in a simple village in northern Greece where she herds goats. Then, pirates kidnap her and she enters a life where slave traders and owners determine her fate. Interestingly, she starts life in Europe and ends up as a slave in Africa – opposite to the slave route that most slaves endured, and opposite to the route that many refugees and migrants now travel. The inclusion of piracy, slavery and the reversal of this route will, I think, lead to thought-provoking discussions, especially with older children.

In lieu of a fairy godmother, Naidoo includes a well-known storyteller/philosopher, Aesop, who befriends Rhodopis and counsels her to “bend, not break” when faced with difficulties. That and her kindness to various creatures lead to her meeting, and union with, the princely pharaoh.

The themes of Cinderella, the power of kindness, adapting to one’s circumstances, and love, shine through in Cinderella of the Nile. I think children also will enjoy seeing how this tale features characters of varying skin tones and ethnicities, how a noted storyteller, Aesop, plays a role in the outcome, and how kindness to all creatures benefits Cinderella, even without the flick of a magic wand or the transformation of a pumpkin into a carriage.

Vafaeian’s colorfully rich illustrations not only complement but complete Naidoo’s retelling. With her “fine red curls,” Rhodopis is a focal point of every illustration, standing out even among the vibrant flora and fauna that fill every page.

I also love that Cinderella and her pharaoh are an interracial couple, as shown in the last gorgeous spread. 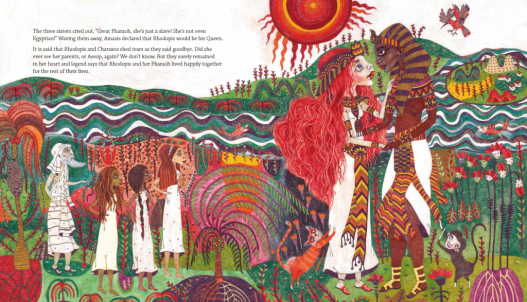 Cinderella of the Nile is the first of Tiny Owl Publishing’s One Story, Many Voices series, which showcases the universality of fairy tale themes as evident in many similar stories told by “voices from around the world” that reflect the circumstances of particular times and places. How would you rewrite the Cinderella story, or some other favorite fairy tale, to reflect where and when you live or to better include people like yourself?

Learn more about Carnegie Award-winning author Beverley Naidoo at her website and in this article about Cinderella of the Nile.

Cinderella of the Nile was named one of 10 picture books that promote empathy by book reviewer Mamma Filz. A reviewer in The Telegraph noted how this Cinderella overcame adversity “without a fairy godmother or a fancy frock.”

Read Adelita: A Mexican Cinderella Story and Glass Slipper, Gold Sandal: A Worldwide Cinderella to see how this story changes at differing times and places, even as its themes remain universal.

To help celebrate #TellaFairyTaleDay, I chose a retelling of the Three Little Pigs, with a Southwest African twist.

Opening: “Hot, hot, hot! The little dassies were almost grown up and it was time for them to find their own place. Mimbi, Pimbi, and Timbi waved good-bye to Mommy, Daddy, aunties, uncles, and all their cousins and set out for the distant mountain.”

Brief Synopsis: Like the three little pigs, the 3 little dassies build three different houses to shelter from the elements and from a foe that views them as dinner.

Links to Resources: Visit Jan Brett’s author page for cards and character masks, and even videos in which Jan shows viewers how to draw a dassie. Slightly older children may enjoy finding out more about the Namib desert setting, the dassies, the agama lizard, and the eagle.

Why I Like this Book: The 3 Little Dassies is a wonderful retelling of the classic Three Little Pigs on so many levels: set in Namibia, a part of Africa about which I am relatively unfamiliar, featuring animals that are also relatively unknown (dassies, or rock hyraxes, are most closely related to elephants – who knew?), dressed in the native dress of the Herero women. And note that the generally masculine pigs have evolved to become female dassies, another plus, as we see the trio build their homes. Unlike the wolf who huffs and puffs, the eagle “flaps and claps”, an activity repeated throughout the story and sure to be repeated by young listeners, too. Even the Dassies’ names are clever: Pimbi means dassie in Swahili.

As in author-illustrator Jan Brett’s other picture books, The 3 Little Dassies includes side illustrations that tell part of the story and the illustrations are framed – in this case with swatches of Herero fabric. Finally, the resolution of the Dassies’ problem encompasses an origin myth: “…if you travel to Namibia today, you will see dassies living in stone houses…” After reading this Perfect Picture Book, my suitcases are packed!