Sometimes I read something by a particular author and immediately search out everything else s/he’s written and anxiously await her or his next book. I think serious readers can relate – who doesn’t have “one of those collections”? Sometimes, with picture books, it’s the illustrations that speak to me, as in the case of today’s pairing. 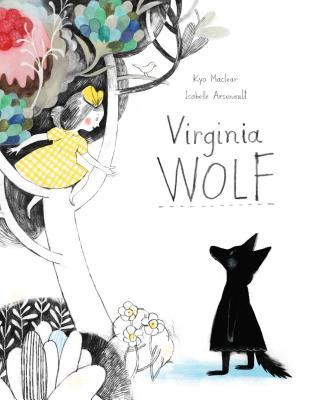 Vanessa’s sister, Virginia, is in a “wolfish” mood — growling, howling and acting very strange. It’s a funk so fierce, the whole household feels topsy-turvy. Vanessa tries everything she can think of to cheer her up, but nothing seems to work. Then Virginia tells Vanessa about an imaginary, perfect place called Bloomsberry. Armed with an idea, Vanessa begins to paint Bloomsberry on the bedroom walls, transforming them into a beautiful garden complete with a ladder and swing so that what was down could climb up. Before long, Virginia, too, has picked up a brush and undergoes a surprising transformation of her own. Loosely based on the relationship between author Virginia Woolf and her sister, painter Vanessa Bell, Virginia Wolf is an uplifting story for readers of all ages.

Read a review at This Picture Book Life.

The stars belong in the deep night sky, and the moon belongs there too, and the winds belong in each place they blow by, and I belong here with you. So begins this classic bedtime book, richly illustrated by award-winning artist Isabelle Arsenault. The pages journey around the world, observing plants and animals everywhere, and reminding children that they are right where they belong. A beautiful title for new babies, adoptive families, and children of all ages.
You are a dream that the world once dreamt,
And now you are part of its song.
That’s why you are here, in the place where you’re meant,
For this is right where you belong.

Read a review at Brain Pickings.

I paired these books because both are quiet books that reassure children and both feature Arsenault’s distinctive illustrations. In Virginia Wolf, Virginia is in a “wolfish” mood that causes her sister Vanessa to worry and use art to lift Virginia’s spirits. I think Vanessa’s actions and Virginia’s response will reassure children of all ages who either suffer from mood swings or live with someone who does that moods can change for the better. With its lyrical text and soft illustrations, You Belong Here also provides reassurance, in this case that no matter what, you belong with loved ones. Both books are perfect for a cozy read by a fireplace on a cool evening!

PPBF – Cinderella of the Nile

Many of us in the US are heading out for the start of the summer holidays this weekend. And what better thing to pack than a good book, especially if that book transports us to a land far away and to a time long, long ago… 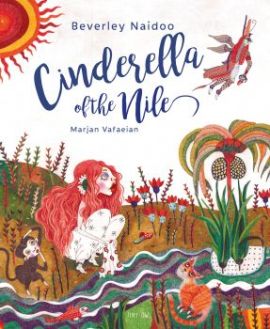 Title: Cinderella of the Nile

Suitable for Ages: 4-8 or older

Long, long ago when pirates roamed the seas around Greece, a beautiful baby girl was born in a village to the north. She had eyes like sapphires and fine red curls. The happy parents, who had waited many years for this child, called her ‘Rhodopis’ because her cheeks were so rosy.

In this retelling of an early Greek version of the Cinderella story, a kind-hearted young girl is transported to a land far from home. There she toils as a slave, until a new owner treats her as a daughter and gifts her red slippers, and a wife-seeking pharaoh falls in love with her.

Like many other young and not-so-young readers, I love fairy tales. I especially love seeing how versions differ across regions and eras, even as the story themes remain the same.

In Cinderella of the Nile, I found several aspects of the storyline that differed from the popular version of my youth. For instance, this story lacks an evil stepmother and a fairy godmother. Instead, Rhodopis begins life with loving parents in a simple village in northern Greece where she herds goats. Then, pirates kidnap her and she enters a life where slave traders and owners determine her fate. Interestingly, she starts life in Europe and ends up as a slave in Africa – opposite to the slave route that most slaves endured, and opposite to the route that many refugees and migrants now travel. The inclusion of piracy, slavery and the reversal of this route will, I think, lead to thought-provoking discussions, especially with older children.

In lieu of a fairy godmother, Naidoo includes a well-known storyteller/philosopher, Aesop, who befriends Rhodopis and counsels her to “bend, not break” when faced with difficulties. That and her kindness to various creatures lead to her meeting, and union with, the princely pharaoh.

The themes of Cinderella, the power of kindness, adapting to one’s circumstances, and love, shine through in Cinderella of the Nile. I think children also will enjoy seeing how this tale features characters of varying skin tones and ethnicities, how a noted storyteller, Aesop, plays a role in the outcome, and how kindness to all creatures benefits Cinderella, even without the flick of a magic wand or the transformation of a pumpkin into a carriage.

Vafaeian’s colorfully rich illustrations not only complement but complete Naidoo’s retelling. With her “fine red curls,” Rhodopis is a focal point of every illustration, standing out even among the vibrant flora and fauna that fill every page.

I also love that Cinderella and her pharaoh are an interracial couple, as shown in the last gorgeous spread.

Cinderella of the Nile is the first of Tiny Owl Publishing’s One Story, Many Voices series, which showcases the universality of fairy tale themes as evident in many similar stories told by “voices from around the world” that reflect the circumstances of particular times and places. How would you rewrite the Cinderella story, or some other favorite fairy tale, to reflect where and when you live or to better include people like yourself?

Learn more about Carnegie Award-winning author Beverley Naidoo at her website and in this article about Cinderella of the Nile.

Cinderella of the Nile was named one of 10 picture books that promote empathy by book reviewer Mamma Filz. A reviewer in The Telegraph noted how this Cinderella overcame adversity “without a fairy godmother or a fancy frock.”

Read Adelita: A Mexican Cinderella Story and Glass Slipper, Gold Sandal: A Worldwide Cinderella to see how this story changes at differing times and places, even as its themes remain universal.

PPBF: The Most Wonderful Thing in the World

What is the most wonderful thing in the world? You’ll have to read this Perfect Picture Book to find out! But I think anyone with a child will understand (and run out to purchase this book).

Title: The Most Wonderful Thing in the World

Opening: “Once, in the time of your grandmother’s grandmother, there was a kingdom.”

Brief Synopsis: The king and queen search for a husband for their only daughter by running a contest: whoever can show them the most wonderful thing in the world will become her husband.

Why I Like this Book:
Both the words and the images in this book transported me to another place and time. Set in the Edwardian era in a place with Venetian overtones, the lyrical prose and lovely watercolour vignettes work together to tell a story of “love of family as the center of life” while including “a playful undercurrent of both whimsy and irony.” (Kirkus Reviews, 4 Aug 2015). And while written in the “then and there” classic fairy tale tradition, The Most Wonderful Thing in the World also incorporates some of the here and now in both words and subtle (and some not-so-subtle) images.

Although The Most Wonderful Thing in the World reads like a newly-written fairy tale, in the endnotes Angela Barrett mentions that she had remembered a story of that name from her childhood and convinced Vivian French to retell it. Reading this makes me want to pore through old books to find a “new” old fairy tale to rewrite!

I also love how both author and illustrator weave allusions to today into the story. You’ll have to read the book to see what the illustrator hides in plain sight, but I can’t resist sharing my favourite lines of the book:

The last of the suitors had sailed away to his kingdom, his weapons of mass destruction rejected.

“How can anyone believe weapons are the most wonderful thing in the world?” asked the queen.

The king shrugged. He was too tired to answer.

Finally, to bring this review full-circle, look again at the opening. I love thinking about “the time of your grandmother’s grandmother” as a way to show that this story happened long ago. I can’t wait to write about a past event and figure out a way to anchor it using an equally understandable measure of time that resonates like this.