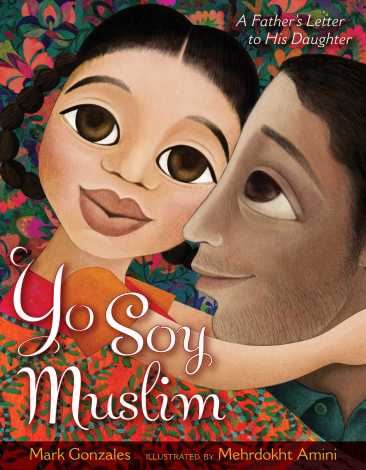 Title: Yo Soy Muslim: A Father’s Letter to his Daughter

It has been said, if you climb a tree to the very top and laugh,

your smile will touch the sky.

A Muslim Latino father writes a letter to his daughter celebrating their multicultural identity.

In sparse, lyrical text, Gonzales breaks down stereotypes as a father’s words inspire a young Latina Muslim to be strong and proud of her diverse heritage. Respecting history, Gonzales conjures images of “Mayan pyramids that too lived amongst the heavens” like modern skyscrapers do today. From the heavens, Gonzalez returns to earth, asking what it means to be human, and preparing the daughter for questions that will be asked of her, “What are you?” “and where are you from?”  He acknowledges that some people “will not smile at” her, but assures her that she will do amazing things, as her ancestors did. In my favorite passage, Gonzalez writes:

No matter what they say, know you are wondrous. A child of crescent moons, a builder of mosques, a descendant of brilliance, an ancestor in training.

To be an ancestor in training, to be one revered by future generations, is something we can wish for all children, and especially for one whose faith and ethnic heritages place her among not one but two peoples who face discrimination within certain sectors today.

I love that Amini, who grew up in Iran but now lives in England, was chosen to illustrate Yo Soy Muslim. Her jewel-toned illustrations combine imagery from rural Mexico with images from Islam, such as mosques and the crescent moon, and highlight the rich heritage of both cultures.

Yo Soy Muslim is not a traditional children’s story with a named main character who faces a problem and experiences growth. Rather, it is presented as a lyrical letter with the father showing his daughter her history and future, and exhorting her to be proud, even when others disagree.

A few Spanish words are used in the text, but very few. Interestingly, though, the author, or possibly the publisher, chose to use Spanish words in the title. By placing the Spanish terms with Muslim, the reader is alerted right away that the two belong together.

Check out more of Mehrdokht Amini’s art on her website.

Learn more about Salaam Reads, “an imprint that aims to introduce readers of all faiths and backgrounds to a wide variety of Muslim children and families and offer Muslim kids an opportunity to see themselves reflected positively in published works.”

Susanna Hill’s Perfect Picture Books provides reviews of picture books by topic. While Susanna is taking a break for the summer, you can still check out the other great picture books featured there!

3 responses to “PPBF – Yo Soy Muslim”