Today is the 103rd anniversary of a daring flight by Ruth Law, a female pilot and the subject of one of today’s perfectly paired picture books. As so many Americans anticipate holiday flights next week, I thought it would be interesting to look back to the dawn of aviation, and the roles two courageous female pilots played in that history.

On November 19, 1916, at 8:25 a.m., Ruth Law took off on a flight that aviation experts thought was doomed. She set off to fly nonstop from Chicago to New York City. Sitting at the controls of her small bi-plane, exposed to the elements, Law battled fierce winds and numbing cold. When her engine ran out of fuel, she glided for two miles and landed at Hornell, New York. Even though she fell short of her goal, she had broken the existing cross-country distance record. And with her plane refueled, she got back in the air and headed for New York City where crowds waited to greet her. In this well-researched, action-packed picture book, Heather Lang and Raúl Colón recreate a thrilling moment in aviation history. Includes an afterword with archival photographs. 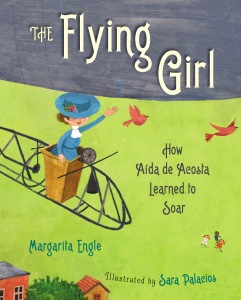 The Flying Girl: How Aída de Acosta Learned to Soar

On a lively street in the lovely city of Paris, a girl named Aída glanced up and was dazzled by the sight of an airship. Oh, how she wished she could soar through the sky like that! The inventor of the airship, Alberto, invited Aída to ride with him, but she didn’t want to be a passenger. She wanted to be the pilot.

Aída was just a teenager, and no woman or girl had ever flown before. She didn’t let that stop her, though. All she needed was courage and a chance to try.

I paired these books because they both feature ground-breaking female pilots at the dawn of aviation, who conquered their fears and society’s expectations to soar to new heights. Each book focuses on the flight and events leading up to it, and both contain helpful backmatter about each pilot and her role in aviation history.