Today is the 103rd anniversary of a daring flight by Ruth Law, a female pilot and the subject of one of today’s perfectly paired picture books. As so many Americans anticipate holiday flights next week, I thought it would be interesting to look back to the dawn of aviation, and the roles two courageous female pilots played in that history. 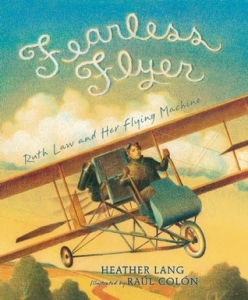 On November 19, 1916, at 8:25 a.m., Ruth Law took off on a flight that aviation experts thought was doomed. She set off to fly nonstop from Chicago to New York City. Sitting at the controls of her small bi-plane, exposed to the elements, Law battled fierce winds and numbing cold. When her engine ran out of fuel, she glided for two miles and landed at Hornell, New York. Even though she fell short of her goal, she had broken the existing cross-country distance record. And with her plane refueled, she got back in the air and headed for New York City where crowds waited to greet her. In this well-researched, action-packed picture book, Heather Lang and Raúl Colón recreate a thrilling moment in aviation history. Includes an afterword with archival photographs.

The Flying Girl: How Aída de Acosta Learned to Soar

On a lively street in the lovely city of Paris, a girl named Aída glanced up and was dazzled by the sight of an airship. Oh, how she wished she could soar through the sky like that! The inventor of the airship, Alberto, invited Aída to ride with him, but she didn’t want to be a passenger. She wanted to be the pilot.

Aída was just a teenager, and no woman or girl had ever flown before. She didn’t let that stop her, though. All she needed was courage and a chance to try.

I paired these books because they both feature ground-breaking female pilots at the dawn of aviation, who conquered their fears and society’s expectations to soar to new heights. Each book focuses on the flight and events leading up to it, and both contain helpful backmatter about each pilot and her role in aviation history.

I’m starting National Poetry Month with a picture book biography written in free-verse by Margarita Engle, the Young People’s Poet Laureate, as she shines a light on a little-known first woman of flight and inspires us all to soar.

One day, a girl named Aída was strolling on a lively street in a lovely city when she glanced up and was dazzled by the sight of a huge balloon that glided as gracefully as a whale-shaped moon.

Brief Synopsis: The Flying Girl recounts the story of how young Aída de Acosta became the first female to pilot a motorized aircraft.

As Engle recounts in this inspiring, lyrical biography, all Aída needed to pilot a motorized dirigible was “courage and a chance to try”. We learn in the Afterword that Aída did so despite her parents’ disapproval and months before the Wright Brothers undertook the much better-known first airplane flight at Kitty Hawk. I think children will enjoy learning about this brave young Cuban-Spanish-American woman, who followed her dream to soar in the skies. And perhaps they’ll be inspired to soar towards their dreams, too.

Palacios’ bright, mixed media illustrations capture the excitement of this aviation first. I especially like that she set many of the illustrations against a sky-blue background. Many also include bright red birds – a detail younger children especially will enjoy following. 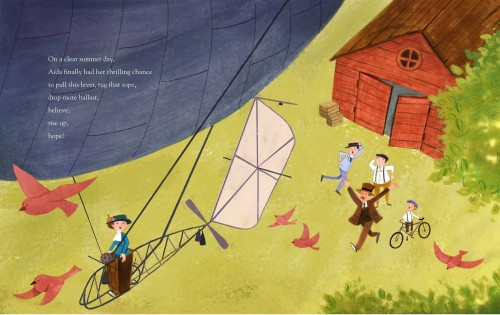 In The Flying Girl, Engle focuses on one event in the life of Aída de Acosta, the short time she spent in Paris where she discovered Alberto Santos-Dumont’s dirigible, convinced him to teach her to fly, and then flew the dirigible by herself. In the Afterword, we learn the rest of her story, but I believe Engle keeps unnecessary details out of the text so the reader better experiences Aída’s journey from dream to soaring.

Although Aída is a teen in the story, well above the normal picture book main character age range, Engle focuses on her interactions with her mother when she discovers Aída’s aspirations, she renders Santos-Dumont childlike by referring to him only by his first name in the text, and she includes “excited children” and “giggling children” as onlookers. Perhaps most importantly, Engle addresses children in the last lines of the story, as Alberto declares Aída “a brave inspiration for all the girls of the world!”

Read a wonderful guest post on “poetry that crosses borders” by Engle on the Grog and her reasons for hope for #OwnVoices poetry in a Nerdy Book Club post, both last fall. To read a recent poem building a bridge of peace by Engle and to post your own poem about “choices”, visit René LaTulippe’s No Water River. See my reviews of a few of Engle’s other works: All the Way to Havana, Bravo!: Poems about Amazing Hispanics, and Miguel’s Brave Knight: Young Cervantes and His Dream of Don Quixote.