PPBF – The Secret of the Tattered Shoes

Sometimes when events in my own life or on the world stage get me down, there’s nothing better than retreating into a fairy tale – a fantasy world filled with princesses, heroes, and magic. And when that tale is a collaboration between an award-winning British author and an award-winning Iranian illustrator, I know that I’m in for a treat (and a welcome respite from the divisions that threaten our world), and that you are, too. 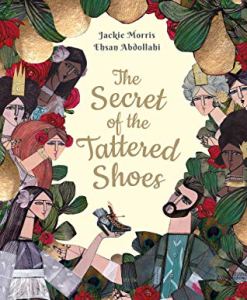 Title: The Secret of the Tattered Shoes

A soldier, weary from war, wandered the land. His heart was heavy, troubled by all he had seen and much that he had done, in the name of the king.

In a forest, rich with the green light of sunlight through emerald leaves, he met a woman. He was a hollow shadow of a man. She brimmed with light and life.

With the help of a wise and kind woman, a war-weary soldier accepts a king’s challenge to discover why the shoes of his 12 daughters are worn out each morning.

A war-weary soldier meets a woman in the woods. She tells him of a mystery in need of solving by a hero, and she presents him with advice and a gift to help in the quest. When the young man arrives at the castle, he meets a king who needs to know why his daughters’ shoes are worn thin each morning, even though the girls are locked in their chambers each night. The quest: to discover the secret. The stakes: succeed and the soldier is free to marry the princess of his choice and inherit the kingdom and its riches; fail and he forfeits his life.

Like the fairy tale on which it is based, The Secret of the Tattered Shoes combines mystery, magic and a quick-thinking hero. It’s a child’s story, so the adults know in advance that our soldier will survive and solve the mystery and that love will prevail. I won’t spoil the story by sharing how the hero prevails and how he reacts when he does.  Suffice it to say that anyone tired of damsels-in-distress stories will be pleased to read Morris’ version and to learn of the soldier’s choice at the end.

Not only does Morris’ text read like a fairy tale of old, but Abdollahi’s mesmerizing and richly-coloured collaged illustrations transported this reader to a faraway land where magic is possible, and kindness and love prevail.

This is a fairy tale retelling and I heartily recommend that writers read the original and Morris’ version side by side. When I did so, I was surprised to see that in many places Morris tracked the original quite closely. But there were subtle changes, including starting with the forest scene rather than a recounting of the mystery and changing “old woman” in the woods to “a woman”, thus rendering her less witch-like, although clearly someone with magical powers. Even the surroundings seem life-giving and capable of restoring the weary soldier. Could it be that love prevails better in the refuge of the sylvan wilds than in a gilded court?

Learn more about the independent UK publisher, Tiny Owl Publishing, Morris and Abdollahi. See my reviews of three of Abdollahi’s books, When I Coloured in the World, A Bottle of Happiness, and Thinker: My Puppy Poet and Me. The latter two are also international collaborations, building bridges between creators from different cultural traditions and showing readers how the world can be better when we work together.

11 responses to “PPBF – The Secret of the Tattered Shoes”